Ashaig (from the Gaelic ‘Aiseag’ or ‘ferry’) has a large sandy beach. Above the beach there is an airstrip, now only used by military and service aircraft. Every few years, moves are made to expand the airstrip to regular use, but these initiatives quickly fade away.

Ashaig has ancient religious associations, which is still marked by the old burial ground. Also, it is closely connected with St. Maelrubha (born in Ireland in 7th century) said to have sailed over from Applecross (on a large flat stone) and to have occupied the small island of Pabay opposite the beach. There are still to be seen the sacred spring that gushed forth when the saint tore a small tree from the ground and a rocky crag (The Pulpit Rock) above the river, which he is said to have used as a pulpit. 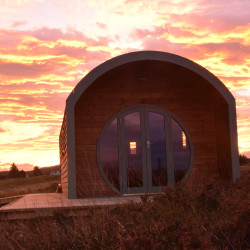 Inside the Hobbit House